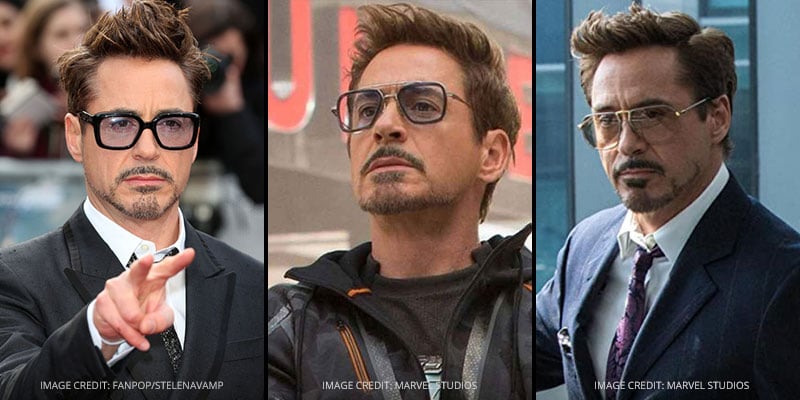 Tony Stark doesn’t need the Iron Man suit to be a weapon of mass seduction, all he has to do is slip into his Tony tints and let the audience swoon. Yes, we’re fixated on Robert Downey, Jr’s super (get it?) eyewear collection. And why shouldn’t we? His unfailing sun tints have cemented a cool image of RDJ since his very first appearance in Iron Man (2008). When he’s not suiting up to save the world, he turns heads at premieres and parties with his signature eyewear. Either way, he steals the show with his ever-upgrading eyeglasses and sunglasses wardrobe. The panache he flaunts with his fashion-forward suits spills over to his unique eyewear choices. So here’s our selection of the best Tony Stark glasses that are now iconic.

Who Is Tony Stark?

Tony Stark is a character played by Robert Downey, Jr. in the Marvel Cinematic Universe. He is a billionaire and also happens to be a brilliant inventor. Stark was living the life of a philanthropist, genius, and playboy until he was kidnapped by a terrorist group in Afghanistan. With his life at stake, he made an armor suit to flee his captors. Upon successfully returning to the US, he customized this armor with a few more unique gadgets to fight terrorism. This gave birth to the superhero will all know and love, Iron Man!

RDJ And His Iron Man Glasses

Iron Man’s ultimate sacrifice in Avengers: Endgame broke our hearts (why am I still crying?). No matter how many tissues I stole from the lady sitting next to me, in the end, I made peace with the fact that he died in style. What style am I talking about? Before he and the audience were launched back to the war of Wakanda, his fate was hinted at in a scene where he talks to his father Howard Stark. As the cinematography incredibly plays with time and space, we can’t help but notice his classy pair of double-bridge square glasses that added more charm to his ‘slickest man ever’ image. To this day, every sunglasses fanatic wants that piece of ‘tony stark glasses’ in their wardrobe. Lucky for you, we found the perfect match with these Brown Tortoise Full Rim Square Eyeglasses by Vincent Chase. 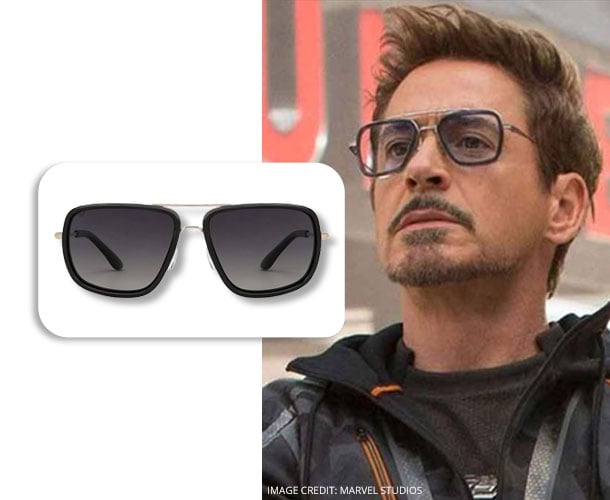 Tony Stark’s tints in Infinity War were aviator-inspired and retro-futuristic that came with tactical intelligence. His E.D.I.T.H glasses got two things right – tech and style! Not only were these glasses capable of accessing Stark Industries’ Global Satellite Network and hacking into any device in Avengers: Infinity War, but they also elevated Tony’s look in a snap! (wink) If you’ve been searching for a pair of these era-defining iron man glasses, look no further. The Polarized Golden Full Rim Square Sunglasses by Vincent Chase have been our bestseller since the movie hit cinemas and still are. So what are you waiting for?

Peter Parker : [In a car with Tony] So, to become an Avenger, is there like trials or an interview?
Tony Stark: Nope, just wear your shades and shine, kid!

No this wasn’t the real conversation but it wouldn’t sound odd if, during all the mentoring through thrilling adventures, the coach had also given spider-man some style tips (he desperately needed it). Iron Man’s glasses in Spider-Man: Homecoming made him look the part – wise and in control – and stylishly so. If you’re wondering which sunglasses Tony Stark wears in this film, it’s quite close to the Gold Full Rim Aviator Sunglasses by John Jacobs. If you’re looking for the perfect summer shades, this pick is still the top searched sunglasses style on the internet. 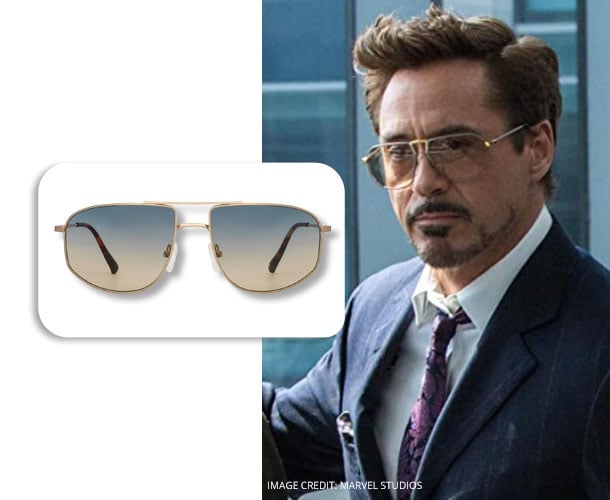 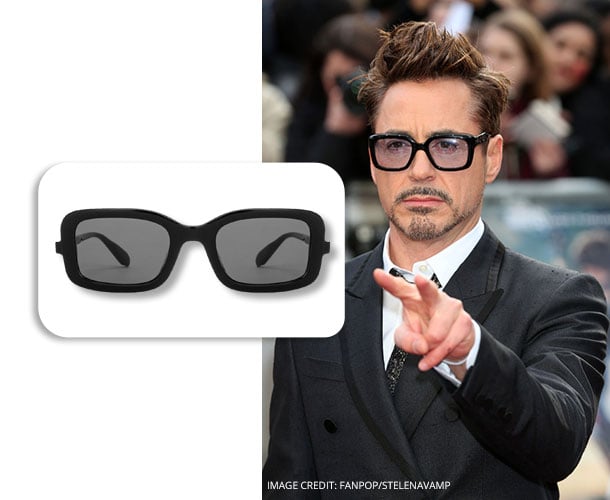 Sunglasses are now synonymous with Robert Downey Jr, and dare we say, signature style? Take, for example, these stark black thick-rimmed rectangle sunglasses that became an absolute stunner at one of MCU’s (Marvel Comic Universe, in case you didn’t know) premieres in London. The Black Full Rim Rectangle Sunglasses by John Jacobs give off the same dapper vibe as the original Tony Stark Sunglasses!

There’s obviously no dearth of eyeglasses and sunglasses through which Robert Downey Jr inspires envy among the onlookers. Talking about Downey’s best sun tints, we can’t help but mention his double-bridge HD-acetate headline-worthy sunglasses that graced his public appearance at the Iron Man 3 premiere at Hollywood in 2013. Here’s your match – the Black Blue Full Rim Hexagonal Sunglasses by Vincent Chase. Apart from providing an unquestionable degree of UV protection, these sunglasses will pair perfectly with your super-sleek suits. And look as badass-y as Tony Stark’s Sunglasses! 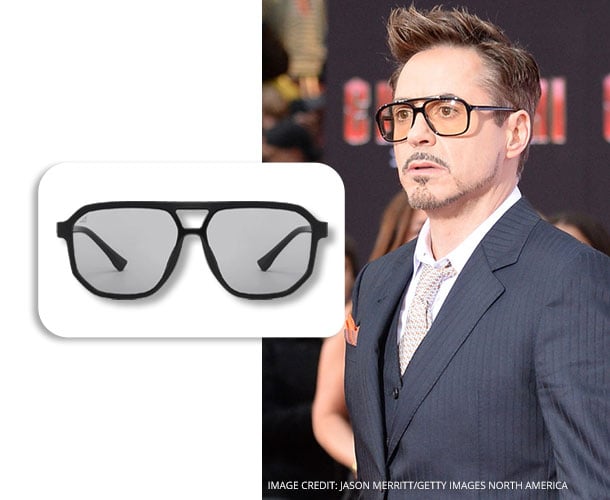 Tony Stark is not just a man in a suit who saves the world, he is a fashion influencer without even trying. A personality that is naturally savage. But we, in all honesty, believe that his coveted range of sunglasses make him a crowd puller. In fact, with the evolution of the character of Iron Man, Tony Stark’s specs eventually evolved into gadgets that can take on cosmic-level threats and come out victorious. Besides, no matter how many suits he made and specs he changed, there only ever was one Iron Man that we respect. Period!