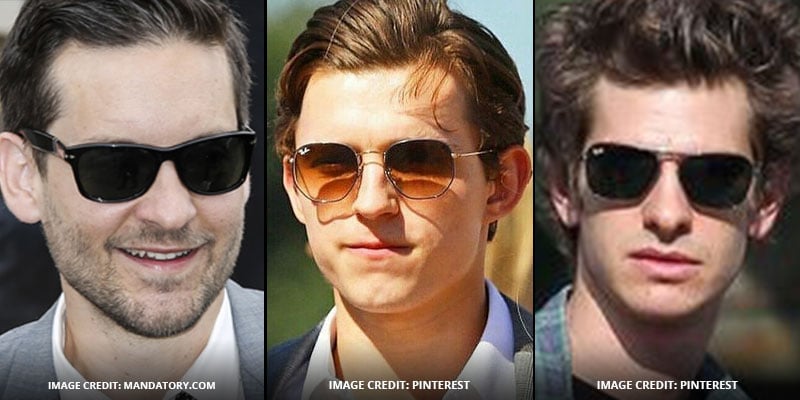 Spider-Man and his web-slinging adventures have steadily found a place in our hearts and on the silver screen. I was 11 years old when I watched the first Spider-Man movie starring Tobey Maguire. Fast forward 19 years, and we have the latest Spider-Man: No Way Home movie releasing this December, starring Tom Holland.

The change of roles also brings up questions like, who was the better actor? Or, who is the best Spider-Man? Tom Holland, Tobey Maguire, or Andrew Garfield? These are not questions with easy answers. But there is something else we are pretty gaga over —their excellent sunglasses style!

I know that “with great power comes great responsibility,” and I will try to remain unbiased!

Alright, I might be just a little biased. From the hilarious “Bully Maguire” memes that bombarded the internet to his character development in the trilogy, Tobey will always be my favorite Spider-Man (*childhood crush*). The series stayed true to the comics and the character, along with all his quirks and quips.

Phew! I got a bit carried away there. Back to Tobey Maguire’s style which we love: casual and laid-back. He was spotted by the paparazzi wearing a white tank, jeans, headphones, and trendy black rectangle sunglasses like the Brown Full Rim Rectangle Sunglasses, that pairs well with his ensemble.

From casual tanks to dapper red carpet looks, Tobey Maguire sure cleans up well! Tobey opted for a classic look at the promotion of his movie; he wore a grey two-piece suit, a million-dollar smile, and dark wayfarer sunglasses for men like the Matte Black Full Rim Wayfarer Sunglasses! Wayfarer sunglasses suit his face shape perfectly and helps shield his eyes from the paparazzi flashlight and the afternoon sun!

Andrew Garfield captures the brilliant but socially awkward teenage nerd who is not afraid to stand up for people. His teenage angst feels very real and relatable; it makes him more endearing.

Analyzing his street style, Andrew is often spotted in a plaid shirt, jeans, and plain tees, the ultimate comfort wear! But he sure knows how to up the comfort level with rectangle sunglasses like the Silver Full Rim Rectangle Sunglasses that matches his uber-cool personality!

Flexing his rugged look and urban chic for a magazine shoot, Andrew was seen sporting a beard, a washed-out grey sweater, and chunky brown round sunglasses like the Brown Full Rim Round Sunglasses that looked stunning on him!

In my opinion, Tom best exemplifies the teenage buoyancy of Peter Parker. Why? Tom was 19 years old, by far the youngest of the three when he first appeared as Spider-Man in Captain America: Civil War! (Taking a moment to appreciate his mentor Iron Man’s sunnies too!) Before he was selected to play Spider-Man, Tom was already an accomplished gymnast and dancer. His physical skills helped him bag the role to a certain extent.

Also Read: Love Chandler And Joey’s Bromance? You Will Definitely Love These Sunglasses Too!

Tom Holland has undoubtedly brought a new life into our favorite friendly neighborhood Spider-Man. But it is not just his crime-fighting skills that we love, but also his killer knack for choosing the most dapper sunglasses. When the perfect pair of retro round frames like the Matte Brown Full Rim Round Sunglasses teams up with his understated boyish charm, his look is complete!

Tom looked effortlessly handsome at one of his promotional tours. He layered a tailored grey blazer over a white cotton shirt and completed his look with a slick hexagonal sunglass frame like the Matte Golden Full Rim Geometric Sunglasses .

In an interview with the Chicago Tribune, the late Stan Lee, creator of the Spider-Man comic said, “I like Spider-Man because he became the most famous. He is the one who is most like me—nothing ever turns out 100 percent OK; he has got a lot of problems, and he does things wrong, and I can relate to that.” And we could not agree more! We love Spidey, but we also love all the actors who played the iconic superhero and the unique individual personalities they brought along to it.