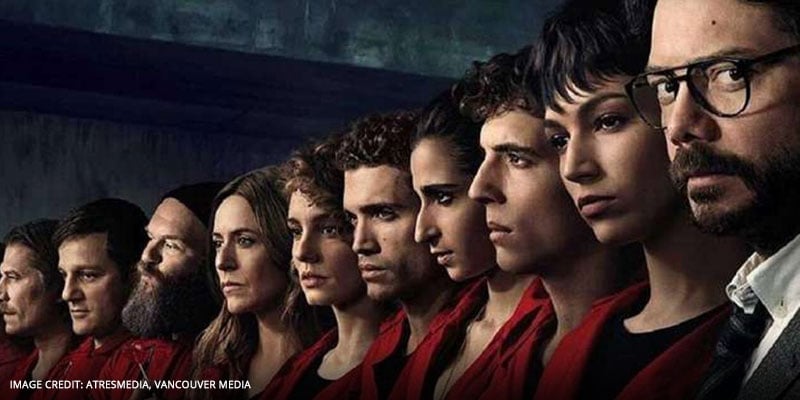 You have rewatched F.R.I.E.N.D.S like a million times and have probably memorized almost every single dialogue and episode of the legendary sitcom. Just when you were wondering if you need a binge-worthy series to watch, Netflix drops a new season of Money Heist. This non-English language series is celebrated for its versatile gang – all code-named after major cities, unified in their revolutionary-red jumpsuits and masked in the classic Salvador Dalí face. Money Heist is much more than just a gripping bank robbery story. The plot is more about the characters, their looks, and their actions – making it the streaming giant’s most-watched series. No one, literally, no one comes first in our minds than El Profesor, Sergio Marquina when talking about gripping characters of the show. What makes his face the most recognized among the masses is the iconic professor glasses that seem like they were made for him. Let’s take a look at the cast of Money Heist, their eyewear choices from the show and how it supported their characters.

Sergio And His Iconic Professor Glasses

Breaking into the Royal Mint of Spain and printing thousands of banknotes, and then fleeing is a plan only a mastermind like Professor Sergio can devise. For most Money Heists fans, “professor glasses”, as the aviator-inspired black frame is popularly called, was the real protagonist. A piece of accessory that didn’t leave his sight even for a single moment. When you are leading a heist as big as La Casa De Papel, you need a good pair of eyeglasses to count on. Don’t you agree? Even in your day-to-day life, a sturdy pair is what you look for, one that sticks around no matter what! Well, get excited because we have found a close match in the Matte Grey Full Rim Aviator Eyeglasses by Lenskart Air. An awesome pair that comes with a clip-on sunshade. This means, eyeglasses when you need them and sunglasses when you want them!

Check Out Stylish Sunglasses For Men

Two incredibly well-planned heists spearheaded by Sergio Marquina aka The Professor needed crystal clear vision and no scope for any mistake. The credit goes to the Professor glasses, hands down! But he even slips into rose-tinted, double bridge accented, tortoiseshell round sunglasses when he falls for Lisbon aka Raquel. It is when she’s captured, he says, “when someone is in love, they look through rose-tinted glasses. Everything’s wonderful. They transform into a soft teddy bear that’s smiling all the time.” Now you know why he wears his rose tinted sunglasses in the scene.

Tokyo is solely responsible for all the nail-biting thrill and tension that bewildered the audience all through the series. But in all honesty, without Tokyo, the show wouldn’t be nearly as interesting as it is now. Badass, smart, young, and unpredictable: the narrator of the entire intriguing show, Tokyo was hot-headed with cool sunglasses. Remember the day the gang was partying, and Tokyo looked out of the world in her winged short skirt? Paired with a cool crop top, a choker and a pair of bespoke round sunglasses that elevated her rebellious look. Somewhat like the Silver Full Rim Round Sunglasses by Vincent Chase that’s all the rage today.

Almost everyone talks about how impulsive and reckless her character is but she is still everyone’s favorite! It’s no surprise that the establishing frames of the show feature Tokyo, her sleek bob hairstyle, and a pair of killer oversized round sunglasses. You can tell this character loves to wear round glasses, sometimes tiny and sometimes oversized like the Black Full Rim Round Sunglasses by Vincent Chase!

She was the lifeline of the gang. A motivator, peacemaker, and leader, Nairobi was the most dependable of all, whether she was in charge or not. She knows how to instill confidence in people to face tough situations optimistically even in the face of death. And she looked stunning in a pair of sunglasses! Nairobi’s sunglasses were also as unique as her character. That pair of heart-tinted sunglasses (sigh)! If heart-shaped sunnies are out of your comfort size, swap them with a pair of pink oversized cat eye sunglasses likeGold Full Rim Cat Eye Sunglasses by Vincent Chase. Super chic, super feminine, and super cool: just like Nairobi!

The much-awaited Money Heist Season 5 didn’t fail to impress its fans yet again. In fact, it is really the first time the show’s season has been divided into two parts. Brilliant marketing strategy by the makers and the streaming giant – Netflix, of course. Gripping and exciting, much like its previous parts. This time when you binge-watch the series don’t forget to wear professor glasses with blue-light blocking lenses to cut down on eye damage that comes from prolonged screentime. On this note, we say Bella Ciao!