Five Music Artists And Their Intimate Affair With Their Sunnies!

Practically, sunglasses are supposed to be worn outdoors but ever wonder why our musicians can’t go on stage without a pair of flamboyant sunnies? Some say it cuts down the contrast emerging from the aggressive lighting while some agree that it aids privacy protection—we say it’s purely out of their flair for fashion.

From boy band fanatics to diehard metal heads, sunglasses have always been a vital part of the act. From airport ambushes to early morning radio interviews and even tiring sound checks; some musicians don’t ever step out without slipping into one. Hence proven, performers and sunglasses definitely share an intimate relationship but never talk about it! So we’re here to make noise about these top few artists that arrive with their shades on at almost every setting. In case you want to mirror their look, scan the list to find your sunglasses for a true style steal.

Harry Styles needs no introduction. The 27-year-old One Direction main lead has become something of an icon of modern masculinity. From Kurt Cobain-inspired California shades in both black and white to his Elton John-worthy frames—Harry Styles gets all his inspiration from the legends of music. He has been spotted more in retro and classic pairs but our eyes are fixated on the boxy peach tinted frame from his first Gucci show appearance that stole the show. We believe that our Gold Brown Full Rim Squares by John Jacobs or our Gold Brown Full Rim Squares by Vincent Chase will do the job for you. The only catch is you dress in a dashing white suit holding a raffia clutch. 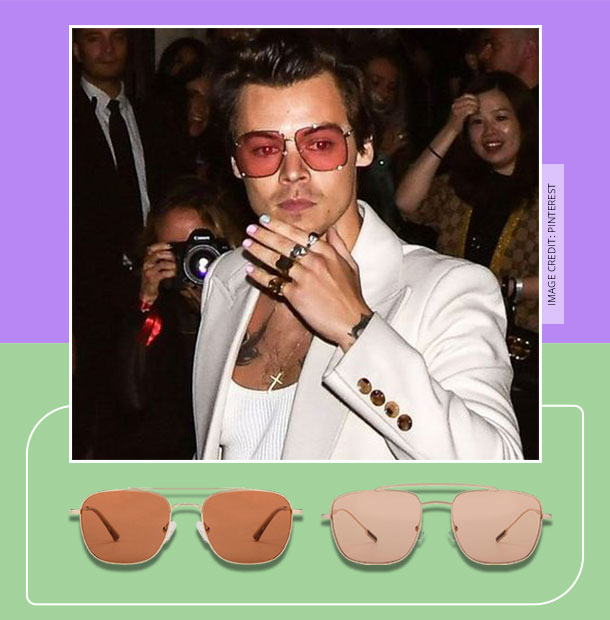 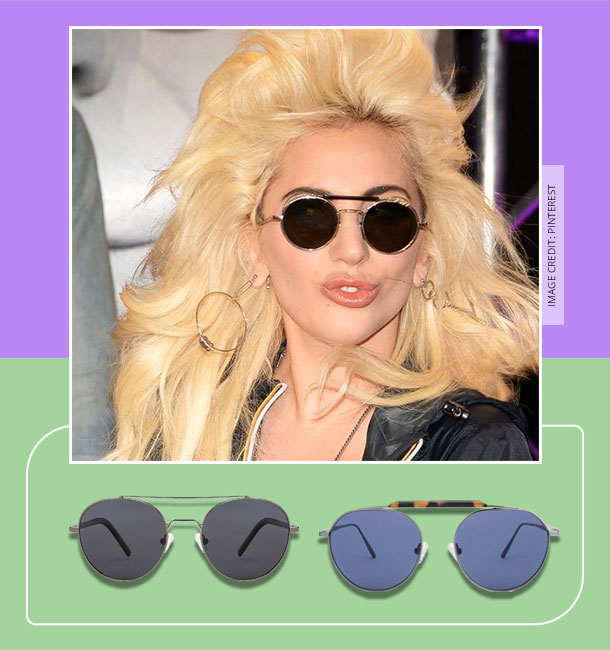 Lady Gaga rocketed up the list as a sunglasses-wearing icon for her international style standards! Her kind of extravagant and fancy sunnies are not for the faint-hearted. And it is never a piece of cake to match up to her dramatic looks but our polarized Silver Black Grey Solid Full Rim Rounds by John Jacobs and the highly coveted Gunmetal Tortoise Gunmetal Blue Full Rim Round John Jacobs Sunglasses saved us from the ignominy. We proudly declare that our slinky aviator-inspired rounders with perfectly distanced double bridges and almost invisible borders can make you look like Lady Gaga. But the outfit will be your lookout! This style solely and only meets the eyes!

Popular as the “Prince of Darkness”, Ozzy Osbourne—the lead vocalist of the pioneering British heavy metal band Black Sabbath is regularly spotted in a similar style of rounds. Perhaps, he is a fan of the classic rounders! Talking about dark-tinted rounders, the Black Grey Full Rim Rounds by John and the Silver Grey Full Rim Rounds by John Jacobs are look-alikes to what the metal artist sports. Thin, almost invisible hems with slender arms and temples dipped in soft silicone casing for a snug fit. Single bridge and adjustable hypoallergenic nose pads come as a part of the package. 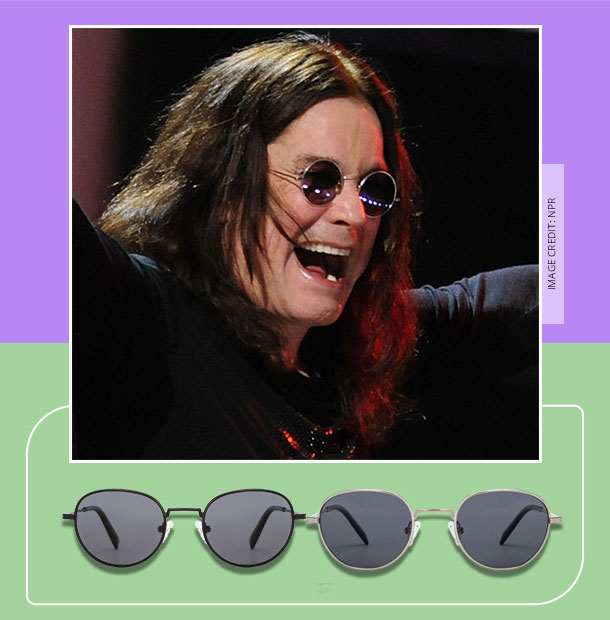 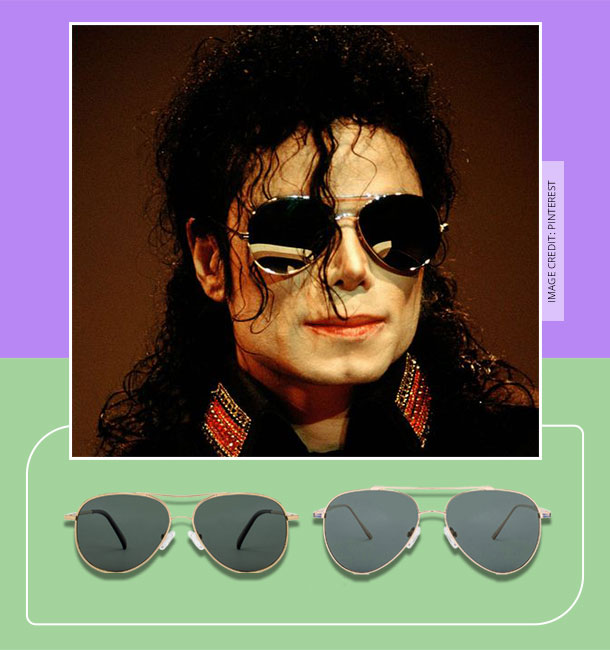 The King of Pop, Michael Jackson, needs no introduction. This world-renowned mega pop star is known for his music and dance but do you know what used to steal the limelight during his stage performances? His super-premium sunglasses! Often seen wearing his aviator sunglasses during public appearances, we believe that our polarized Gold Black Green Full Rim Aviators by John Jacobs and the Gold Green Full Rim Aviators by John Jacobs are the exact-looking shades. Not convinced? Match the well-polished gold temples, minimal bordering with curvy double bridge, and tinted black rounds like the one in the pic and you’ll be sold for an MJ look today.

Worldwide idol for young kids and adults alike; Bruno Mars is a lover of sunglasses. He shares a close relationship with black, shiny, polarized wayfarers and aviators which is evident in his outdoor gigs and music videos. Remember the chart-busting Uptown Funk or 24K Magic? Because he arrives most places with his shades on (even in our head when someone calls his name) we simply can’t picture him without his wayfarers. For that reason alone, finding his wayfarer style in the Matte Black Grey Full Rim Wayfarers by Vincent Chase and in the Blue Full Rim Wayfarer by Vincent Chase was easy. The boxy arms and seamlessly fused polarized lenses with dark acetate rims make you a top-of-the-mind man or woman! 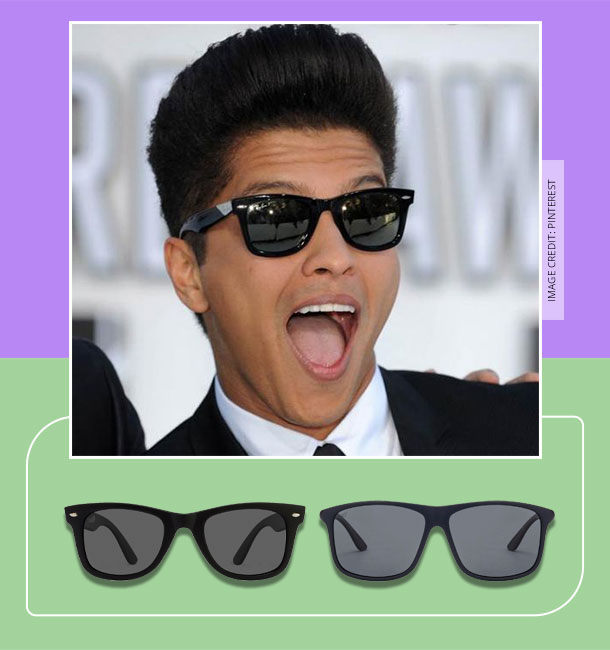