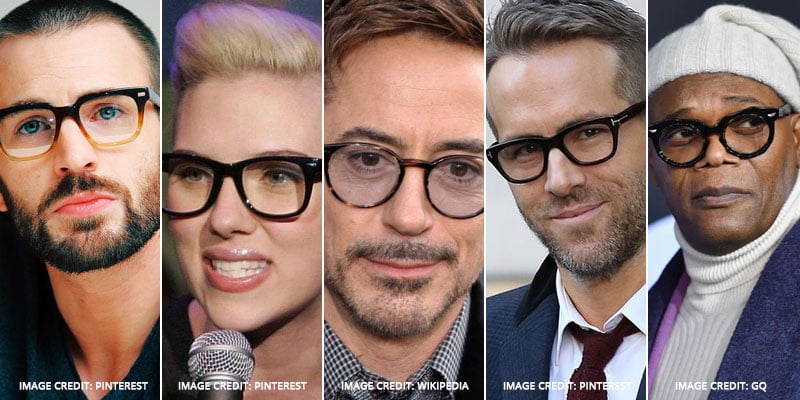 I remember the summer of 2019 when kids and grown-ups alike (including me) had goosebumps and cheered on top of their voices when Captain America delivered the iconic line, “Avengers assemble!” And cried like a baby when Tony Stark said, “And I am Iron Man”. We all grew up with a favorite superhero. What is not to love? They have superhuman powers, fight villains, and help make the universe a better place. And also their iconic outfits and accessories!

Captain America’s shield and Thor’s hammer are the most powerful weapons in the Marvel Universe. No doubt! But did you know, in real life, a great pair of eyeglasses does so much for these superheroes? Don’t believe us? You will, when you are done reading this article.

We have rounded up 15 Marvel superheroes wearing eyeglasses. These actors prove us right that typical prescription glasses can look high fashion.

If you are a die-hard Robert Downey Jr. fan you might remember this dapper look—he paired tortoiseshell round eyeglasses with a stunning blue suit at a red carpet event. And guess what? We have a similar pair of glasses for you.

At an event in Paris, Scarlett Johansson opted for black-framed glasses, also popularly called ‘nerd glasses’. But we call it ‘spectacular’ and the perfect fashion accessory anyone can have!

Whether you are a Chris Evans or Marvel fan, you ought to love his choice of glasses. They express the traits of Captain America and the heartthrob Evans. We spotted him wearing a very unique, dual tone pair in yellow and brown that we just can’t get enough of.

You are probably thinking, it is easy for a guy like Chris Hemsworth to carry off any look, no debate there! But his must-have accomplice for effortless style isn’t some mighty Asgardian hammer, it’s killer eyeglasses.

Mark Ruffalo has played Hulk since 2012’s sThe Avengers. This reel life angry green man is the sweetest in real life! And his relaxed style is what we love the most—simple casual attire paired with statement half-rim eyeglasses. Talk about balancing comfort and style!

Black Half Rim Round Eyeglasses

Red Golden Half Rim Round Eyeglasses

If there is a man that knows his way around a wardrobe, it is the legend, Samuel L Jackson. If you want to emulate the S.L. Jackson style, opt for the trendy round clear frame glasses.

Chadwick Boseman will always be cherished as Black Panther. His untimely death was mourned all over the world with millions paying tribute. His movies and iconic style including the oversized square eyeglasses he sported will be treasured forever.

She is the Academy Award-winning actress who stepped into the boots of Captain Marvel– say hello to Brie Larson. A chunky jumper teamed with a pair of oversized black eyeglasses, Brie is your classic girl-next-door!

Charming and with a great sense of humor that’s quintessentially British, Paul Bettany is also an astonishingly underrated fashion icon. Bettany’s choice of eyewear has always been on point, like the iconic aviator seen here.

Whatever role he’s playing on-screen, he does it with conviction, be it Sherlock Holmes or Doctor Strange. Benedict Cumberbatch’s style is classic like the vintage-inspired thin frame eyeglasses he has sported here.

Characterized by his classic, refined, and intellectual looks, Paul Rudd looks smart and sharp in his dual-tone wayfarer, half-rim eyeglasses in this adorable picture with his pet dog.

An advocate of timeless looks, Ryan Reynolds is the star we can all stand to take a tip from! A man of many talents – especially his style, he often dons a pair of thick-rimmed, wayfarer eyeglasses.

Wolverine made us realize that wearing glasses can make you look better than without them. Hugh Jackman loves his 1970s-inspired aviator spectacles. They are fun, classy, and suit his devilishly handsome, square-shaped face!

While technically a super villain, Loki redeemed himself in Avengers Endgame so he’s a hero in my books! When not playing the God of Mischief, Tom Hiddleston could easily pass off as your English professor! This isn’t the first time Hiddleston has worn glasses in public, but these rectangle black frames, in particular, suit him so well.