3 Past Seasons IPL Captains That Rock Eyeglasses Off The Field! 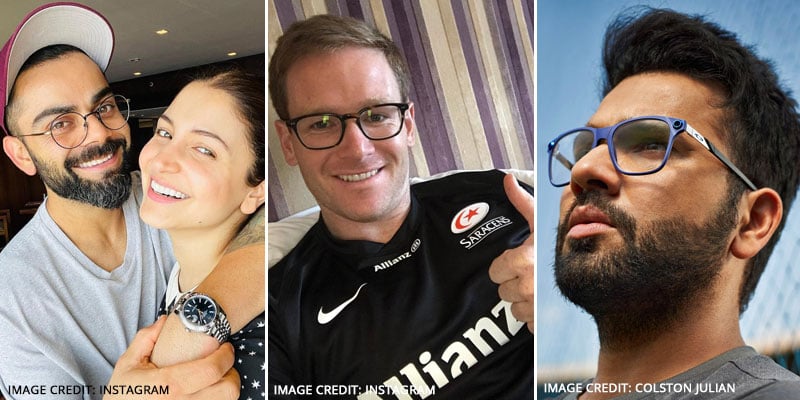 Whenever we talk about IPL captains or cricketers, no one comes first to mind than our captain cool MS Dhoni. However, some fans would argue that it’s probably Rohit Sharma and some may even side with Virat Kohli, the fight over cricket and its players is what makes it exciting! But there has been a trend of wearing eyeglasses off the field by IPL captains that fans who are also fashion fanatics are noticing. Did you spot it? Cricketers like Anil Kumble in his aviator spectacles and Virender Sehwag in rimless eyeglasses have already given us enough fashion inspo on glasses for men. What a delight it is to see young players following in their footsteps! If you are inspired by your favorite cricketers eyeglasses styles, you can flaunt them with Lenskart’s Not Out Offer–Buy 1 and get 1 @ Rs. 1199/- with lenses.! How exciting!

Handed over the captaincy at a relatively young age, Virat Kohli is not only a record-breaker on the field but also remains unbeaten in his style game off the field. Can we really forget Virat Kohli’s specs that broke the internet? It was a pair of Harry Potter-inspired round glasses that had fans copying the look. And since the day he posted his selfie in round spectacles, we can not keep calm. Recently, he posted a photo with his wife Anushka Sharma, and fans got to see Virat Kohli in specs yet again. So we couldn’t resist and found a similar match in John Jacobs Gunmetal Full Rim Round Eyeglasses. We bet it’s the closest frame to Virat Kohli’s specs you’ll ever find on the internet. Get your hands on them at the earliest with Lenskart’s exciting Not Out Offer on the website.

The Irish-born Englishman is known as a natural finisher with his brilliant stroke-play. Eoin Morgan revolutionized the English team and branded it as one of the top teams in the ICC ranking earlier this year. Team England’s aggressive brand of cricket in the ODI’s under Eoin captaincy got him the IPL captain tag for team KKR in 2019. His fans’ invincible support and belief of him being an underdog still hold hope for the KKR team in IPL 2022. We leave it for the cricket fanatics to decide whether he deserves more credit for his contribution to cricket but we can’t stop raving about how great he looks in his new spectacles. Simple and sophisticated; much like Lenskart Air Black Full Rim Cat Eye like Eyeglasses that are lightweight, and timeless yet downright cool.

As fondly called by the fans—Row-hit Sharma—is one of those IPL captains who finishes big innings with ease. He was always an audacious striker but his batting got even better when he became the captain of Mumbai Indians. Doesn’t winning five matches in the IPL series speak volumes about how capable he is as a captain? On-field he speaks with his bat and off the field, with his newly found spectacles for active sports. If you have an active lifestyle like Sharma, we recommend the New Balance Maroon Full Rim Rectangle Eyeglasses. These glasses are built with an e-lock feature that is designed to keep the frame intact on the face and meet the daily hustles of an athlete.

There’s a reason they say: Cricket is not a game, it’s an emotion! We all have our favorite and inspiring sports idols. And we turn to the internet to buy a replica of Dhoni’s or Kohli’s jerseys for the next game. Hoping to wear it as a symbol of pride when we get a chance to watch an IPL match in the stadium (fingers crossed!). Ever wonder why we do that? Because it makes us feel even more closer to the game and the players. Till then their go-to eyeglasses choices may help you watch the matches (at home) with clarity. Pick your favorite IPL captain and wear their matching spectacles to support them in the next match.