Glasses Are Your Superpower, Musa! Celebs Cheer Up Boy Bullied For Wearing Glasses

Kids who do not wear their spectacles are telling us something. Your kids refuse to wear eyeglasses for a variety of reasons, one of which can be bullying. Getting kids to wear their spectacles can be a herculean task but many parents have done it! Some parents constantly remind their kids to wear specs, some try to inspire them through their fave superheroes who wear eyeglasses and some even turn to Twitter for help. Yes, Musa’s story is an exemplary case in point and an excellent story to inspire your child to wear their specs.

This is the story of a boy named Musa, who was bullied by his classmates for wearing glasses. Do people around you call you names like four-eyes and nerd? It’s an experience all the specs-wearers go through, young and old alike. Should you be disheartened? Never! Because as you grow up, you’ll understand that what the world thinks of you doesn’t matter as long as you’re happy and healthy. What should really matter is what you think of yourself—very rightly enlightened by celebrities across the globe who came forward on Twitter to cheer up little Musa. A special thanks to his papa for turning to Twitter for help, next thing we witnessed was an outpouring of support from globally renowned stars who finally managed to convince Musa that glasses are cool. Today, he loves wearing them.

One day Musa refused to wear his glasses. He told his parents that he doesn’t like wearing glasses because his classmates call him names and laugh at him for wearing glasses. His father realized that he needed to see the world through different eyes. He wanted to show his son that he wasn’t alone and that people who wore glasses can also be cool. So he tweeted about Musa’s struggles at school in the hopes to motivate him to wear his glasses.

“This is my son Musa, from last few days he is very upset because some of his schoolmates said; you look worst in glasses, he’s hesitant to wear glasses anymore. I told him let’s ask the world. Doesn’t he looks great in glasses too?” he asked the Twitterati.

This is my son Musa, from last few days he is very upset because some of his school mates said; you look worst in glasses, he’s hesitant to wear glasses anymore.
I told him let’s ask the world
Doesn’t he looks great in glasses too? pic.twitter.com/wT0jfcVUkf

I showed him some of the comments before he left for school today. Can’t explain how happy he is.
Thank you very much for overwhelming response. 🙏🏽

Message has a message for all of you.
😎🤩😍 pic.twitter.com/xDpH0ecZba

Within seconds of posting that picture of cute little Musa on Twitter, his father started receiving tweets and DMs from actors, journalists, cricketers, and even ministers who joined in to cheer him up in the comment section.

The six-year-old boy from London shared a message for all, thanking them for their love and support. He said he doesn’t mind wearing glasses anymore. “Whoever wears glasses, I love them,” Musa said in a video message. “I’m very happy… the comments made me happy and (I’ve) started wearing glasses again,” he added in a cheery clip.

Once again, faith in humanity has been restored. Twitter rallied together to cheer Muse up by sharing selfies flaunting their specs. One person even matched his eyeglasses with Musa’s. And why not, don’t the little lad’s glasses look downright awesome? If you want a pair like Musa’s, we’ve found the perfect match! The Sky Blue Full Rim Rectangle Eyeglasses by Lenskart Junior has spring hinges, which means they are unbreakable, soft on skin, and light as a feather. The eyeglasses Musa’s sporting in his video can be matched with the Lenskart Junior Black Full Rim Rectangle Eyeglasses. This pair of eyeglasses is made of acetate, making it super lightweight and highly durable.

Remarkable support showed by celebs from around the world lifted little Musa’s spirit. Musa is now a happy kid in glasses. So all you little munchkins, always remember, if your glasses have power, you’ve superpower! 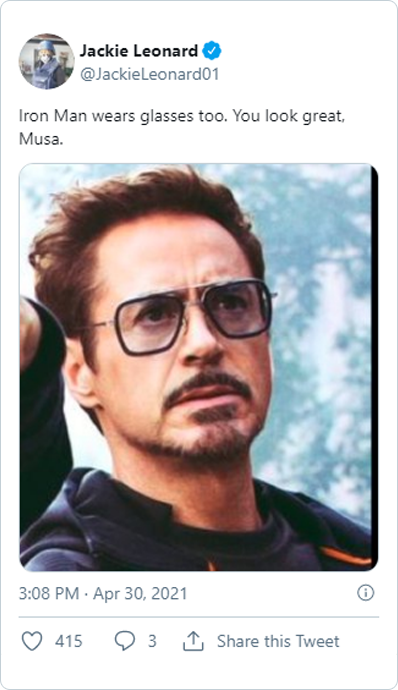 He won’t know who I am but tell him I said,boys with glasses are the coolest! As are girls! ❤️

Hey Musa. I have been wearing specs since I was in class 3. I was 8 years old. I am now 60😇you look too cool

All you need is a little patience, and your little one is sure to come around.

Live Wire Collection | Top Metal Frames For Leaders At Work
Slay The First Day At Your Job With Trending Eyeglasses
Groom’s Guide: Say ‘Eye Do’ To Fashionable Eyeglasses!
Women’s Day: Empowering Eyeglasses When Your Life Takes a Turn
How To Choose The Right Frame Color For Your Complexion?
Best Eyeglasses For Men With A Round Face