Friends Reunion: The One With The Iconic Eyewear Trends 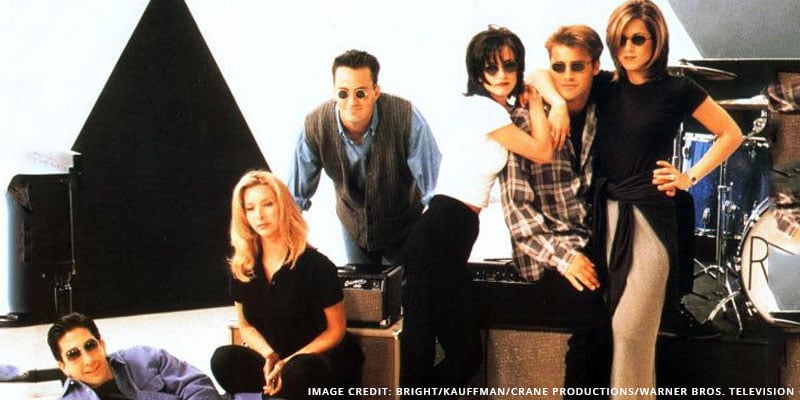 Friends isn’t merely a sitcom, it’s an emotion. A lot of us would honestly attest to watching it more than several times. But even after all the reruns, frame by frame, we bet you missed noticing the eyewear trends set by Friends. Because for the most part, it was shot indoors; it is pretty much mission impossible to spot the classic sunnies and eyeglasses they donned throughout the show’s run. But being an ardent fan, the most rib-tickling episode of eyewear you can remember is the one where Chandler got glasses. Without a pair, could the episode be any better? Not really. Read on to discover similar eyewear moments that evoke nostalgia. Buckle up, mate because you’re in for a joyride… 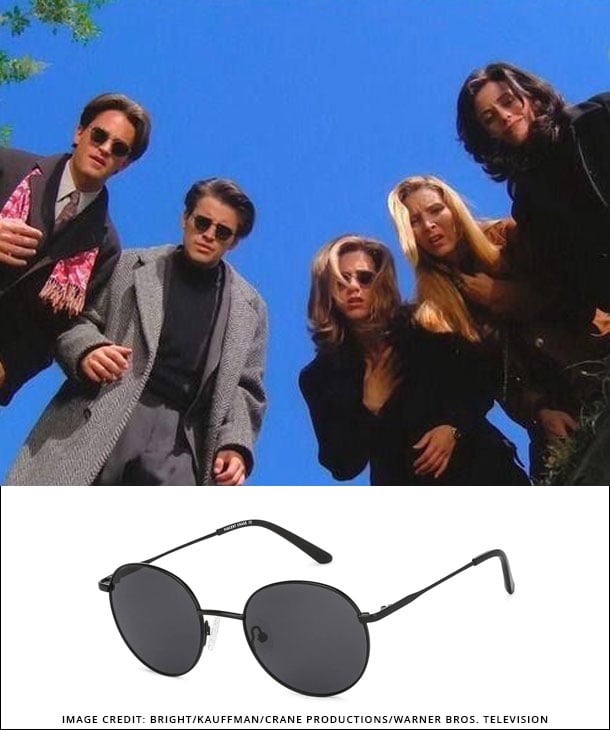 Season 1, Episode 8: The One Where Nana Dies Twice…

The Internet has talked, at great length, about what made the show special but none included the stronger-than-Feviquick bond of Chanoey. This duo set major friendship goals by slipping in those look-alike rounds that perfectly hide their playful disposition.

Plot: The Geller family is gathered at the hospital when Ross and Monica’s maternal grandmother passes away–twice. At the cemetery, Ross falls into an open grave accidentally and hurts his back. Just when he falls, the gang looks down at him and Oh. My. Gawd! Chandler and Joey measuring the square pit through their slinky rounders melted our hearts. What a classic choice of rounders! Luckily, our latest Vincent Chase Polarized Matte Black Full Rim Round Sunglasses is inspired by  Joey’s stark black round lenses supported with slender arms. Contrarily, Chandler wasn’t a guy you look up for fashion advice but sarcasm (at most), yet his rounders didn’t go unnoticed. We found a close pick to his wide-armed sunnies in the Gold Full Rim Round Sunglasses by John Jacobs that flaunt a regal gold finish.

They don’t know that we know they know we know that tiny tints are the new kind of cool today.  While she may not be a huge fan of her most memorable looks on the show (she wasn’t a fan of The Rachel hairstyle back in the day too), it’s clear she was an original fashion influencer without even realizing it.

Plot: As Joey’s grandmother visits to watch him on TV, Ross has trouble flirting with the pizza delivery girl, and Rachel tries to find Monica’s earrings that she has misplaced. Amid all the events, Ross’s flirting lessons turn out to be of the ‘how not to do it’ variety, but Rachel takes pity on him and helps get him the number. In a 2017 interview with Glamour, she even called the “ridiculous” tiny sunglasses that she wore on the show. Little did she know, those tiny sunglasses have taken over the fashion scene by storm today. Wondering where you can get the tiny sunnies today that were popularized by Rachel Green in the ‘90s? Look no further than the Black Rimless Round Sunglasses by Vincent Chase. Tiny, cute and statement-making – if you prefer a hint of color, the Brown Rimless Round Sunglasses by Vincent Chase can be your go-to. 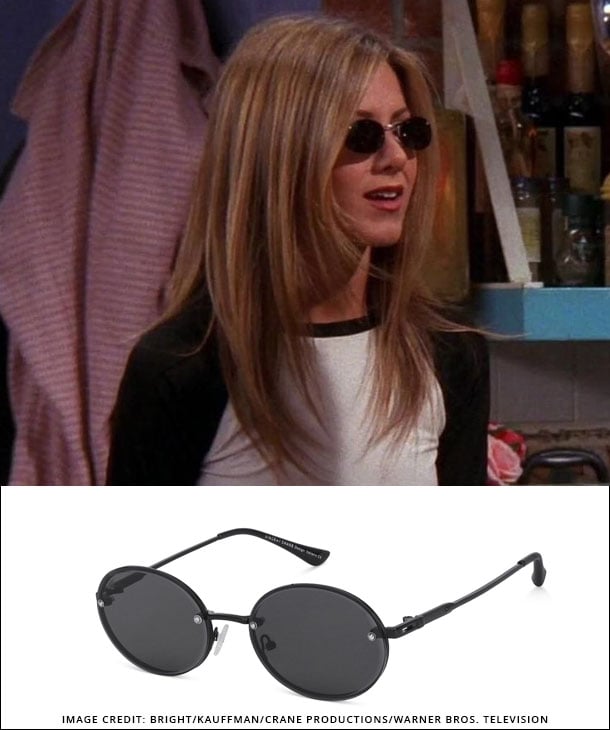 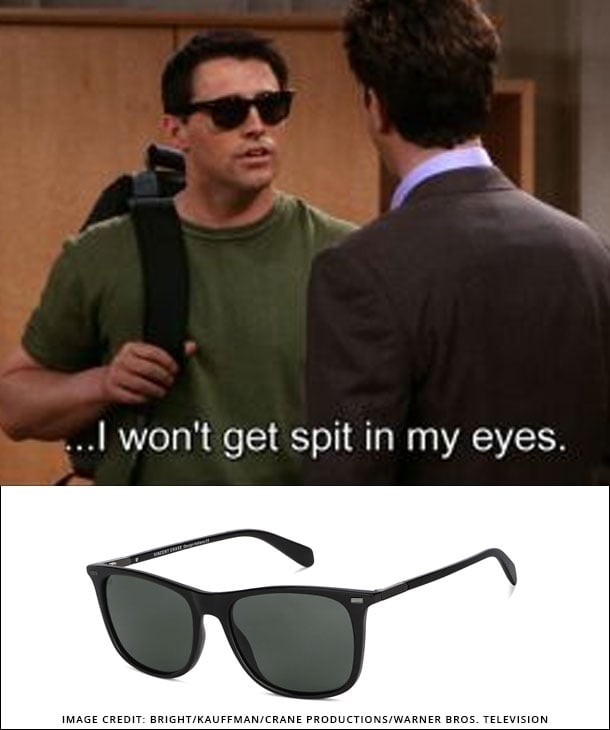 Season 7(Seven, Seven, Seven…), Episode 23: The One With Monica And Chandler’s Wedding

Mr Tribiani strikes the perfect tone with a sexy pair of Ray-Ban wayfarers as he reaches the venue of Chandler and Monica’s wedding.

Plot: While Chandler gets all jittery and nervous right before the wedding and runs away, Joey is combating his own struggles at the set where he acts opposite a famous actor in a war movie. But can’t bring himself to tell the actor that he spits when he says his lines. This explains why he showed up wearing those killer wayfarers! And also because it was a wedding, the ladies man always knew how to dress to the nines before he threw his catchphrase, “How You Doin’?” to impress the women. Joey just was ahead of his time in fashion with his funky wayfarers that we absolutely adore in this episode! And even found a similar style in the Vincent Chase Polarized Black Full Rim Wayfarer Sunglasses. He sure doesn’t share food, but you can have his sunglasses. Go buy!

Never good at advice, but Mr Bing always knew how to make the room light up with his quick wit, jokes, and sarcasm.

Plot: Monica tries to figure out Phoebe’s grandmother’s secret cookie recipe. Meanwhile, Rachel tries to teach Joey how to sail.  After the official engagement, Chandler wants to bond with Mr Geller and he has an awkward encounter in the steam room.

Fun fact: Matthew Perry started wearing glasses in his daily life outside of Chandler Bing. So the writers decided to incorporate it into the show for more anecdotes. No one can forget the hilarious episode where chandler got glasses and gave a lap-dance to his father-in-law by accident. Without his glasses fogging up, was it even possible? That’s how important a pair of glasses can be in iconizing a legendary sitcom. And that is exactly why the Matte Gunmetal Full Rim Oval Eyeglasses by John Jacobs couldn’t be any more body-shaming legendary! 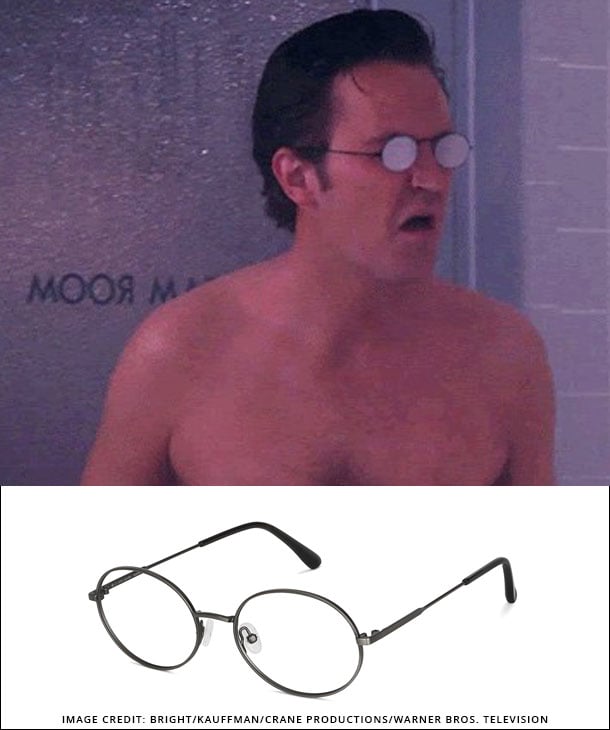 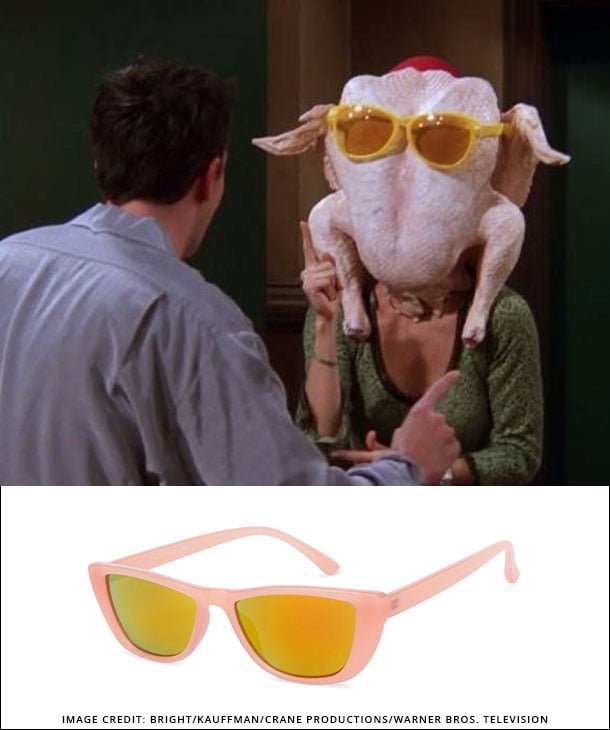 Season 5, Episode 8: The One With All The Thanksgivings

Plot: After Monica’s Thanksgiving dinner, the gang took a stroll down memory lane recalling Thanksgiving from when they were younger. The main highlight was when Chandler learned that he had lost his toe because he called Monica fat. Chandler’s body-shaming made Rachel angry because Monica was her friend, so she attempted to take revenge, resulting in an accident where Chandler lost his toe. Upon hearing this, he gets upset and then angrily leaves the room. In an attempt to apologize, Monica visits his apartment with a turkey on her head, a fez and large sunglasses over it, and dances. And he inadvertently tells her that he loves her for the first time in their relationship. Without those sunglasses, this scene wouldn’t be as iconic as it was? Pulling off that Turkey from the head would have been easy compared to pulling off oversized tints in the ‘90s. Today, oversized wayfarers and squares are all the rage. Inspired by the offbeat tint, the Fallon Colby Pink Full Rim Rectangle Sunglasses almost match its oversized version in FRIENDS.