Five Cricketers Who Clean Bowled Us With Their Super Cool Specs 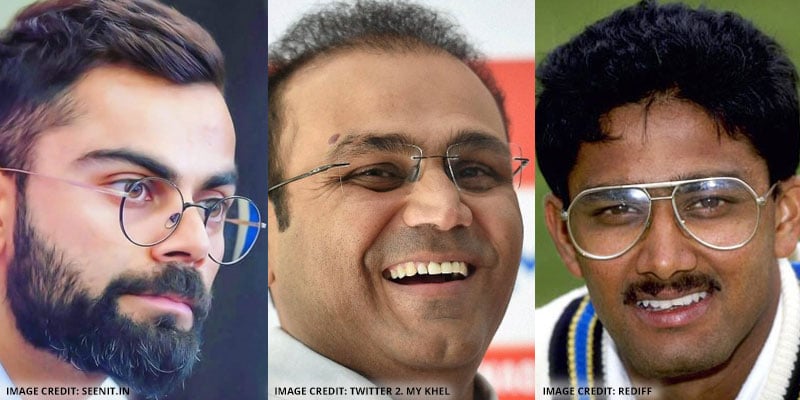 Dodging a hundred and fifty-five grams orb spinning through the air at 144 kmph while sporting cool specs is a totally different ball game (literally!). Weak eyesight can weaken an athlete’s enthusiasm but luckily, it’s no bar to play cricket! Many cricketers like Kohli, Vettori and Ganguly not only batted brutally but even captained on the field with their glasses on.  Let’s leaf through the pages of cricket history in search of who wore glasses and still nailed the game.

The New Zealand top spin-bowler of his generation who retired recently, championed many matches in his uber-cool chunky rectangles. In fact, he was always seen taking long run-ups from stumps before projecting his throw without the intervention of his glasses that we adore! From the start of his career in 1997, he always wore glasses on and off-field. And made us so fond of his all-time fave that we found the exact match in the Black Full Rim Rectangles by Vincent Chase and the Black Gunmetal Black Full Rim Rectangles by Lenskart AIR. What’s the best part? Both are feather-light, which means you won’t even realize you’re wearing glasses. Light, clean and statement-making—can it be any better? BING(O).

Ever wondered what his reason for wearing glasses on the field is? The superstar cricketer recently revealed he wears glasses to protect his eyes from the dust. According to him, he once suffered from myopia but today only wears zero power specs while reading or using digital devices. Looking at all the glam-shapes he likes to sport every now and then on his Gram, we believe Virat wears glasses to show off his flair for fashion. From rimless rounds, Gandhi-style thin rims to oversized squares—his tiny eyewear wardrobe is definitely not so tiny! Talking about his Gandhi-style thin metal frame, we found Black Full Rim Rounds by Vincent Chase along with Gold Black Half Rim Rounds by John Jacobs for a style steal. A sleek metal body with adjustable nose pads and silicone temple tip casing help achieve a snug look.

Most of us may have missed a tiny detail of the moment when Sehwag heroically defended a 146.9 kmph delivery from speedster James Pattinson in a 2013 test match. Of course, the tiny trinket that we missed was his glasses. But Virender Sehwag was that wild stallion of batsmanship that couldn’t be slowed down by his less than perfect vision. So he decided to simply wear a pair on the field. Owing to the courtesy of his classic rimless eyeglasses, Viru has given us uncountable chances to scream ‘HOWZAT’ at full throttle.  The mega batsman seems to be a fan of the rimless trend which is why Black Rimless Rectangles by Vincent Chase and Metal Black Rimless Rectangles by Vincent Chase are the right picks for his style-match. Saying rimless itself is a selling feature, do I still need to define why you should own these right away?

The star bowler has often been spotted along the crease, wiping his glasses before facing fast-paced bowlers. This event went viral on social media after Jack Leach cleaned his glasses before facing a 144.8kmph delivery from Pat Cummins. What glasses are we talking about? His all-time fave rectangles, sometimes in blue, sometimes in the evergreen black but always clean-slated. Considering his choice, we picked the neat and airy-built Navy Blue Gunmetal Navy Blue TR90 Rectangles by Lenskart Air as well as the on-trend  Sky Blue Indigo Full Rim Rectangles by Lenskart Air for a perfect match.

The legendary former Indian leg spinner cannot be left off the list of glasses-wearing cricketers. Although he only wore glasses for part of his career, it did make him lethal on the field. Remember that innings when he claimed all 10-wickets of the Pakistani cricket team on a whim in ‘99? This man of precision was wearing glasses that day and later, won the player of the match title. We consider him the most fashionable player because he dared to sport aviators when it was a runaway trend only limited to sunglasses. He then switched to the classic rimless rectangles but aviators will always remain his first love. Keeping that in mind, we found the super trendy Gunmetal Blue Full Rim Aviator Lenskart Air Air Signia VC E13273 – C4 Eyeglasses and the weightless Gunmetal Black Full Rim Aviator John Jacobs Supreme Steel JJ E12711-C3 for achieving his exact looks.