“The best and most beautiful things in the world cannot be seen or even touched. They must be felt with the heart.” – Helen Keller

Life is generally a tough challenge. And living a life with limited abilities poses problems of its own. It takes courage, perseverance, and zeal to overcome even the most basic tasks that we take for granted.

In India, the population with disabilities is around 26.8 million that’s 2.21% of India’s total population. Despite such a significant proportion, India has a long road ahead to combat challenges and prejudice faced by individuals with disabilities. Especially in rural parts of India, where visually impaired individuals are constantly looked down upon and considered a liability, mainly due to the lack of knowledge, poverty, and in some cases superstitious beliefs.

But few have risen above their shortcomings and excelled in various fields. This World Sight Day, let us learn about and celebrate individuals who have not let their visual disability hold them back in any way. From ruling Bollywood to bagging gold medals, there is nothing these heroes cannot do! 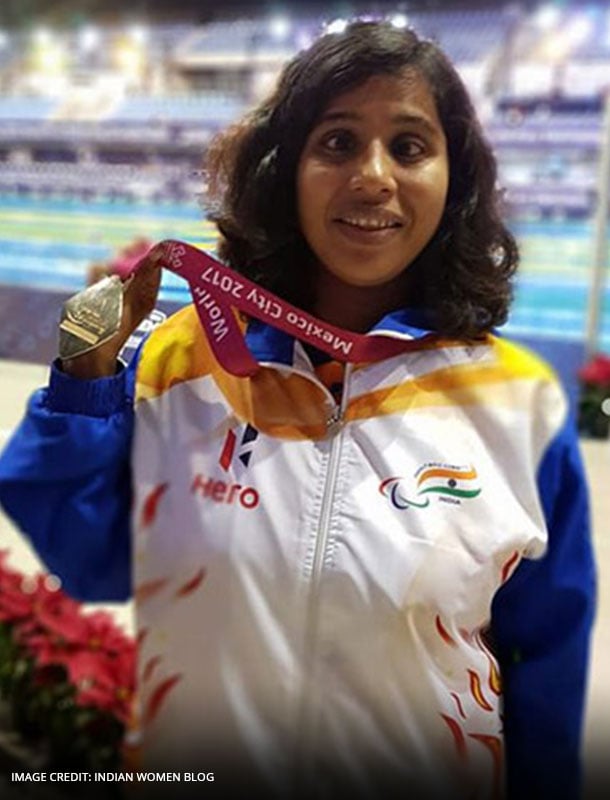 “I believe no one should have an aimless life. There should be a task plan for each day. Planning your perseverance leads to real success!”- Kanchanmala Pande

Kanchanmala D Pande is a visually impaired international swimmer. She has won several medals both nationally and internationally since she was a child. To the surprise of many, she has competed successfully with sighted swimmers at all levels too!

“I started swimming at age ten simply as an exercise and learned it in just eight days. I gradually started participating in swimming competitions. The thought of competition was opposed by people at first, but I moved on. I started competing with children having normal eyesight. My coach Mr. Mangesh Vyavhare took up the challenge to fine-tune my swimming against all odds of society and even of my own family.” Kanchanamala stated to the International Paralympics Committee.

Nagpur’s pride, Kanchanamala’s current medal tally stands at 112, including 106 gold, 5 silver, and 1 bronze at all levels! In her own words, “Society doesn’t accept the ordinary disabled child. They see it with the eyes of pity. So, a change in the mindset is really important.’’

If there is one person who was, is, and will remain legendary in the music industry, it is Late Music Composer-Singer Ravindra Jain. The renowned music composer overcame his lifelong visual impairment and gave us iconic music. Memories of which are imprinted in the minds of music lovers!

Jain started singing young and made his passion his profession when he joined the music industry. He became one of the most notable music directors of the 1970s. Ravindra Jain was also awarded the Padma Shri in 2015 for his contribution to arts with innumerable hits to his credit. His works include Saudagar, Chor Machaye Shor, Chitchor, Geet Gaata Chal, Fakira, Ankhiyon Ke Jharokhon Se, and many more. 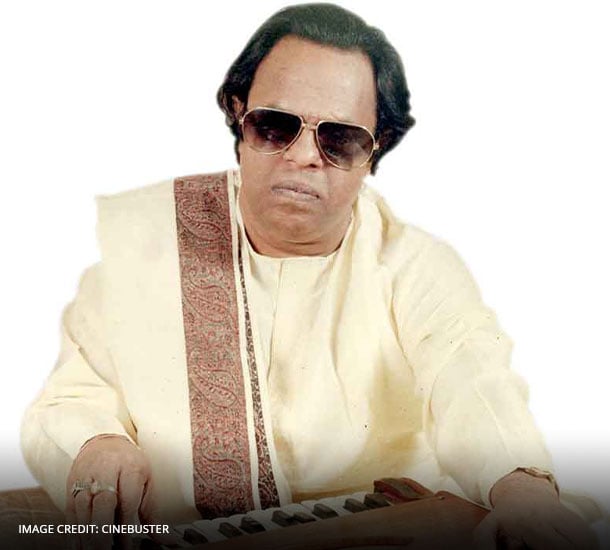 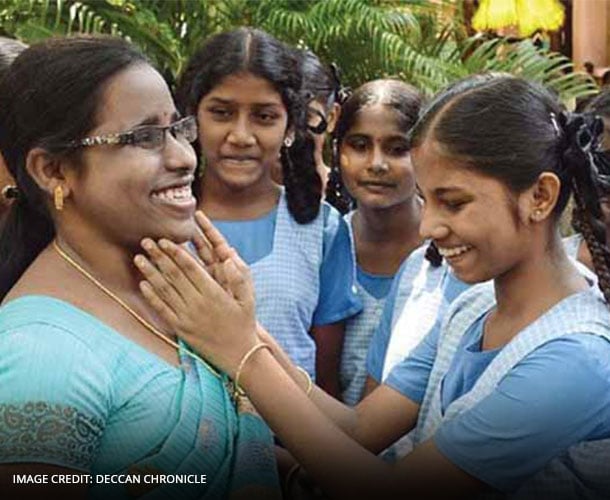 ‘’My parents deliberated a lot on a name for me. ‘Beno’ means daughter of God and ‘Zephine’ means hidden treasure.’’- Beno Zephine

25-year-old Beno Zephine made history when she became India’s first visually challenged person (100% vision loss) to be drafted into the elite Indian Foreign Service (IFS). As a living example of the adage that if there is a will there is a way, the ever-smiling, and charismatic Beno Zephine is an inspiration to many aspiring visually impaired children.

Shekhar Naik is a visually impaired Indian cricketer and a former captain of the India National Blind Cricket team. The son of a farmer, Naik was born blind in a nomadic Banjara family in southern Karnataka. According to Shekhar, in 1994, he slipped into a canal, and that was a turning point in his life. An eye camp in his town and a checkup revealed that he could get back his sight since his retina was in good condition. The operation was successful and 60% vision was restored in his right eye.

In 2017, the Government of India awarded Naik with the Padma Shri. When not playing or coaching, he works as a sports coordinator for an NGO called Samarthanam, which funds the Cricket Association for the Blind in India. 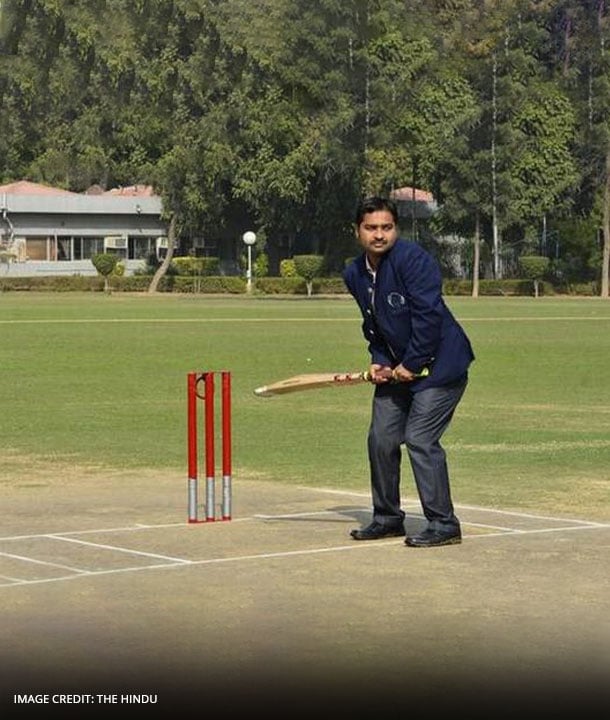 “Why don’t we root for the positive in each and everyone’s life instead of searching for the negatives in them? Why don’t we love and accept others with their strengths and weaknesses? Why don’t we break the barriers and traditions that are followed blindly, which doesn’t help the community in which we are living? Why don’t we smile and acknowledge others at least for a second, which can cause a tremendous change in others’ lives?” — Tiffany Brar, Founder of Jyothirgamaya Foundation, Social Activist, and advocate for an inclusive society.

Tiffany Brar suffered from Terry Syndrome and lost her vision six months after birth. As a blind person, Brar found school difficult. At her schools, Brar experienced exclusion and separation by other pupils and segregation from events.

In some parts of India, visually challenged individuals are confined to their homes by unsupportive societies. This encouraged Brar to found the Jyothirgamaya Foundation to support the education of visually impaired and partially sighted children. In 2017, she received the National Award from the President of India.

6 Honorable Mention From Beyond The Border – CassMae

Born without sight, German-based Cassandra is an extraordinary prodigy! At the age of three, she became deeply intrigued by Chopin and started improvising on the piano, playing her first melodies, and eventually sang her own songs.

In 2017, she received a scholarship for the Summer Performance Program at the Berklee College of Music in Boston. In 2018, 16-year old Cassandra returned to drumming, started learning tabla and experimenting with new, more oriental sounds and languages. You can also hear her perfectly crooning Indian music on Instagram in Hindi, Malayalam, Marathi, Bengali, Tamil, and many other regional languages. 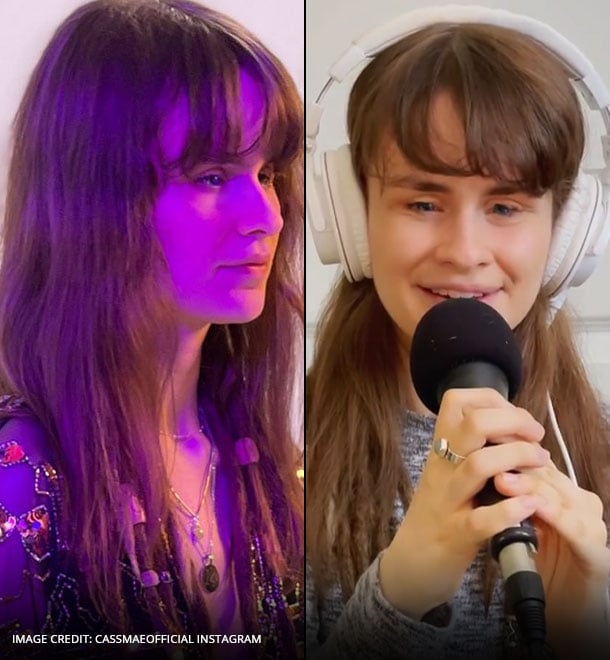 I had the pleasure of speaking with Cassandra and gained some insight into her life experiences. Here’s what she had to say:

Anakims: Growing up, how were you able to overcome the obstacles that being visually challenged posed?

Cassandra: Growing up, I wasn’t much aware of the extent of my visual impairment. I tried to do everything the other children did, just wondering why they sometimes were faster. Later on, music, especially writing songs helped me cope with the situation.

Anakims: We have loved listening to you sing in Indian languages, which can be the toughest tongue twister! Why India?

Cassandra: When I heard Indian music and had Indian food at Berklee for the first time in 2017, I was so overwhelmed and tried to find out everything about the Indian culture and languages. I started learning tabla at an Indian Music school and speaking a little Hindi. Since then, I’ve tried to sing in a couple of Indian languages and love how they sound. Indian music to me conveys a nostalgic feeling.

Anakims: What would be your advice to a young Cassandra and other kids who face similar challenges in their life?

Cassandra: Just try out as much as you can, you can set your limits. Let yourself always be inspired by others

‘Disability is a state of mind’ and these people have surely proved it.